Today I’d like to share my latest amigurumi with you, Millie the Manta Ray. I have named it after one of my friends who works on the Project Manta. 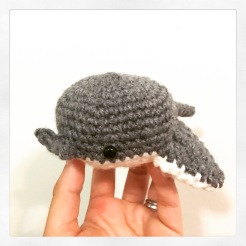 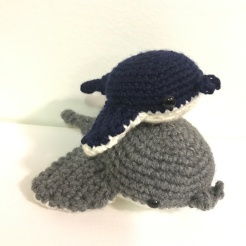 I’ll post the pattern here for free but if you want to get a shiny PDF pattern with extra pictures, I’ll also put it for sale on my Ravelry page for AU$2 (Click here to buy now).

If you would like to get the PDF for free, I will also send it to you in exchange for pattern testing.

And without further ado, the pattern for the Manta Ray.

• DK or 8ply yarn in two different colours (Main Colour for the back and Contrast Colour for the belly)
• 3.75 (F) crochet hook
• Tapestry needle and scissors
• Polyfill

In main colour
Round 1. ch 8, join to rst st with a slip stitch
Rounds 2-4. sc around
Round 5. *sc2 tog, sc* twice, sc2 tog
Rounds 6-9. sc around
Cast off leaving a very long tail
Sew the top of the tail shut and thread the yarn through the tail

1. Using a whip stitch, sew the tail to the back of the body and the mouth piece between the two eyes at the front of the body.
2. For the wings, align 1 main colour and 1 contrast colour with the cast off tails together and use a whip stitch to sew them along two sides of the triangle (see picture below). Then, turn them inside out (to put the seam on the inside). Repeat with the second wing, making sure to put the opposite colour on top (contrast colour if you put main colour on top first and vice versa). Sew the wings on both sides of the body, trying to have them as symmetrical as possible.

Note: Do not stuff the tail and the wings.

Let me know if you decide to make this pattern, I’d love to see your finished products!

That’s it! I’ve finally stitched all the 2016 designs organised by Helene. Now I need to get my fabrics organised and get sewing, to make my nana a quilt with all the finished cross stitch pieces. 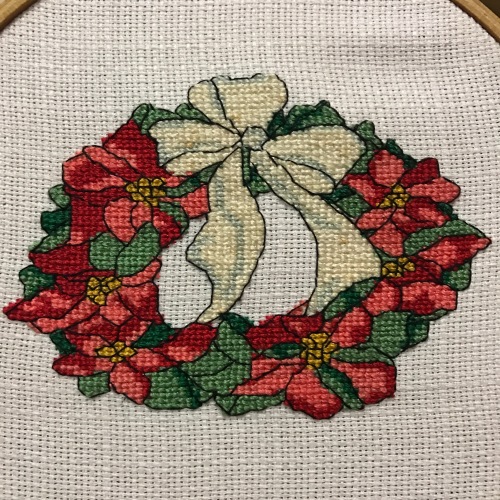 Better get that sewing machine warmed up!

What to do around Brisbane

Today I’m not talking about crafts, but about what to do if you visit Brisbane. My brother was visiting last week and brought a friend that had never been to Australia before. Poor things arrived during the heat wave too!

But we didn’t get discouraged by the heat, and we still managed to go around a bunch of places. Here are my recommendations if you are spending a week in Brisbane.

There are lots of different parks in the area, but one of my favourites is Lone Pine sanctuary. It is the biggest koala breeding program in the world and has really cool shows on (my favourite is the bird of preys one). You can also pat kangaroos, wallabies and emus (although I’d be careful with the emus). 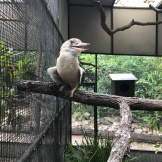 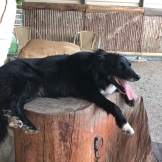 When you think about Australia, do you dream of sandy beaches as far as the eye can see? Well, the gold coast is pretty much that. We went to Surfer’s Paradise, it’s very touristy and I normally prefer the quieter beaches down the coast but it was pretty cool because they had their annual sand sculpture displays. We went on a cloudy day but still got really burnt, I forgot to reapply sunscreen and fell asleep on the beach, not fun (if you do go, put loads and loads of sunscreen, the sun is nasty here).

This was one of the best days. There are quite a few theme parks around the Gold Coast, and even if it’s not cheap, we had so much fun! We went to Movie World during the week so there was no-one there, and we literally just walked to the front of the line every time. So good! And we also stayed for the parade with all the super heroes and characters. The little kid in me was just so happy! 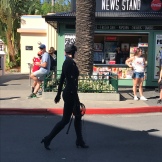 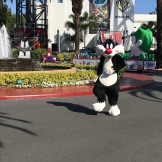 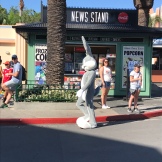 4. Spend the evening in the city

I’ve actually tried a few new places this week that I really enjoyed going to. The first on was Brew. It is located in the city centre but hidden in a little laneway. The inside was amazing, all the walls are lined with original art that you can buy and the DJ was really great. We ordered an appetiser platter and a bottle of house wine for only AU$60 (we were 3 so that was AU$20 each) and honestly I had enough food (although the boys ordered an extra burger for AU$15 each). Also, their truffle fries were amazing!

The second place we went to is in the Valley, next to China Town. It’s a really cool pub called Taps. The reason why it was so cool is that you serve your own beer! That’s right, they have a pretty big selection of beer (that you can pre-taste btw) and then you just pre-pay how much beer you want and you pour your own pints. The other awesome thing is that they have a bunch of boardgames, including Janga. Fun, I tell you!

This is one of my personal favourite. The Queensland Museum and Sciencentre is always a fun time. They have a cool free part of the museum with taxidermy (you can see a bunch of the australian animals there), live animals (pretty cool stick insects and snakes) and a dinosaur exhibition (who doesn’t love dinosaurs?). They also have a pay-to-visit part, which changes quite often (every 6 months or so). At the moment, they have the whole story of how the Hadron Collider came to be. It was so so interesting and really made me wonder about how our universe was created.

Anyway, that’s my list of things to do around (mainly based on what we did with my brother). Of course, I’m missing a lot of cool things you can do on the North side (we stayed in the city and South side) but I might make another post like this about it if you guys are keen.

If you do visit Brisbane and you get bored though, drop me a line and we can go crochet/knit together 😉

I hope you had a great time last week, the break was very welcome for me. We did heaps of stuff with my brother and his friend and I’ll post some pictures on Wednesday. I also (surprisingly considering how busy we were) managed to get some crafting done!

I have finally finished the centre square for the Lord of the Rings graphghan! yay! I’ve made the maths, there are 3,600 bobbles in here, crazy! 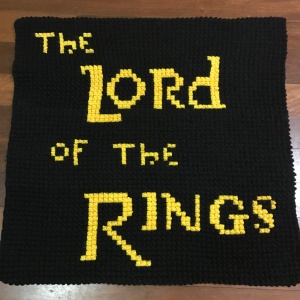 Hopefully, the rest of the squares will go fast compared to this. I’ve already started Sauron and I really hope to have him done next week.

Have a wonderful week!

I am a bit late on my usual Friday post because my little brother arrived yesterday and  he will be staying for a week. So, I might not post much next week either about craft but I might share our adventures around Brisbane 🙂

Anyways, back to craft, I have decided to sign up to test patterns in ravelry and I’ve completed my first project, this adorable butterfly fish. 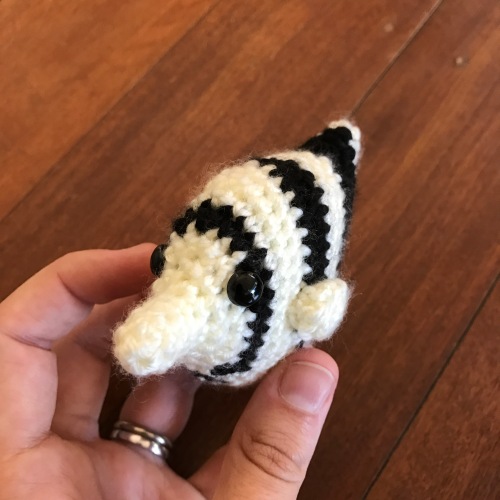 The pattern was actually really good and there are 2 other colour patterns for them so I might make them as well. You will be able to find the pattern on ravelry here.

I can almost see the end!

Like I said last week, my LOTR graphghan is a major WIP that I really hope to finish this year. I’ve been getting back into it but my major issue has been finishing the center square. Why on earth did I think that bobbles was a good idea? I love the look of it obviously but it is taking me forever and it’s been quite hard on my wrist. But I’m almost there and then I can start Saruman 🙂 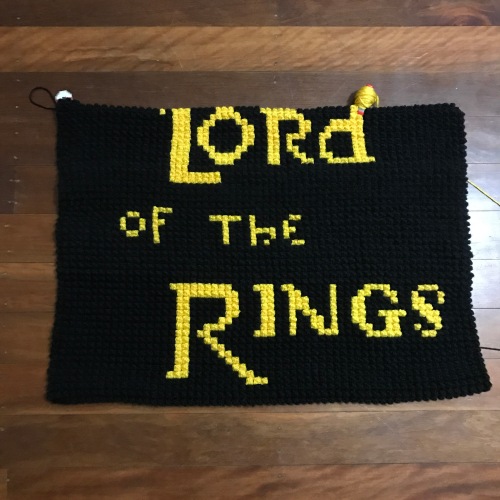 To get some extra motivation, yesterday I decided to join the lovely people from the “Stitch and bitch Brisbane” and it was super great! Everyone was so nice, the projects looked amazing and I got that extra push to get that square finished (hopefully next week). If you’re interested, they are meeting up every Tuesday around 5-6 pm at the Fox hotel  on Melbourne street.

Now, back to the bobbles!

Lately it looks like I’ve been super inspired, I have had a few fast crochet projects over the last weeks. I’m really please with that, but maybe it’s not so good as I’ve also been procrastinating on my bigger projects. Anyway, today’s FO is one of those fast projects, an amigurumi to be precise. It’s inspired from the video game Dofus (it’s pretty good, I used to play it a lot when I was younger and I recently got back to playing a bit). 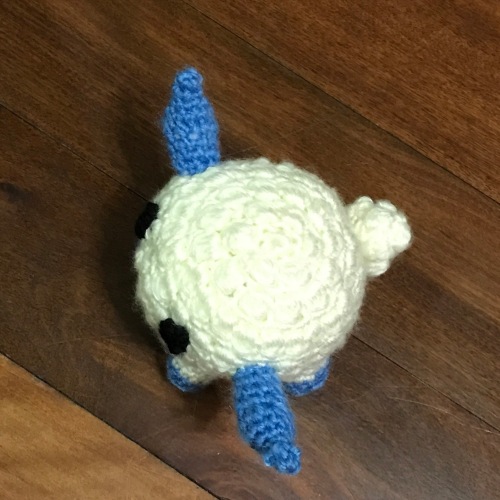 This little sheep is called a Gobball and it’s one of the earliest monsters you can find in the game.

Here is what it looks like in the game.

I might put the pattern up in ravelry eventually, so if you’re interested, keep an eye out for it.

The ripple baby blanket is finished and will be gifted next week! I just did a simple border around to finish it. I used 100% acrylic and it’s super soft, hopefully it will be resistant as well as it gets used.

Have a great weekend!

Today, instead of showing you my most recent work in progress, I have decided to share all the WIPs I hope to finish in 2017.

First up, my crochet projects.

The first of those I’m aiming to finish is the LOTR blanket, I would like to submit it to the Brookfield show (it’s a local craft and art show taking place next to where I live, I participated last year and I’m excited to participate again).

And then, there are my cross stitch projects, mainly one actually. 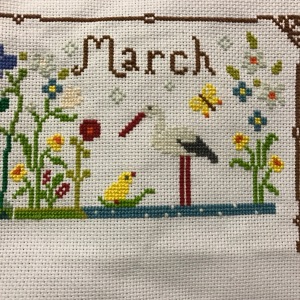 I am also finishing the 2016 SALs (those of you who have been following me for a while might have noticed that I’m currently missing December). I should have this one finished by the end of the month.

How about you guys? What projects are you aiming to finish this year?